The crow is found in the Fera animal family, with a rare rarity. It is one of the few animals in-game that can fly.

On the infobox, the american crow bio reads:

"Crows may be considered harmful to agriculture but they eat up insects and pests that destroy crops."

The infobox for the teen version of this animal reads.

The American Crow model starts of with a black base color, dark eyes, and dark brown beak and feet.

The appearance and color can be changed to match the user's liking.

This ability is the common run/walk action performed by all morphs.

The crow will tuck its legs under itself, close it's eyes and tilt its head downwards.

A common action. The crow bends it's head down and pecks at the ground, making it seem like it is eating seed. A sound effect is also played.

The crow will crouch down similar to the sleep emote, but the head and eyes stay in the same position.

The crow will lie flat on it's back and close it's eyes. The crows wings will be spread out and the head tilted slightly.

The crow will make a cawing noise.

The crow will flap it's wings and hover in the air for a couple of seconds before returning back onto the ground.

An uncommon emote. The crow will hover above the ground and flap it's wings. The player is able to control the crow and fly it around the map freely. To stop flying, you will need to touch the floor or other solid object.

This is an action only able to be performed by avian morphs. There is no special animation to the crow, but it drops an egg that varies in color. Said colors can range from pink, light tan, beige, and a slightly dark tan.

The egg can be clicked on to be picked up. Picking up the egg can allow the carrier to drop the egg once more, throw the egg, or eat the egg.

This is another avian-exclusive action, where the crow lays a nest, which is compiled of sticks. It is dropped like an egg is, still no special animation for the crow.

The nest is handy for when users want to have their crow lay eggs, but don't want them to be stolen. The nest can add an extra layer of security, making it considerably harder for others to grab eggs. It can also add an element of realism. 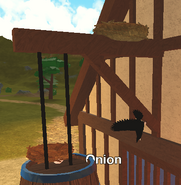 Add a photo to this gallery
Retrieved from "https://roblox-farm-world.fandom.com/wiki/American_crow?oldid=358"
Community content is available under CC-BY-SA unless otherwise noted.